When you’re driving in winter weather it is important to make sure your vehicle is ready, and you are prepared to handle adverse road conditions. The following information can help make your drive safer on snow and ice.

BE PREPARED FOR AN EMERGENCY

Members can download the audio version of this toolbox talk here.

SECURE ALL ITEMS IN YOUR VEHICLE

Newton’s first law of motion states, an object in motion continues in motion with the same speed and in the same direction unless acted upon by an unbalanced force. This is what is known as inertia.

Unsecured items in a vehicle will continue moving at the speed the vehicle is traveling until the item is acted upon; potentially striking the driver, vehicle occupants or the windshield and causing severe injury.

BE AWARE OF BLIND SPOTS

Don’t mount electronic devices on top of the dash or on the windshield, as they can create blind spots.

Minimize items collecting on the dash. When hit with sunlight, they can reflect off the windshield and obstruct the driver’s vision. For example, a person walking in a crosswalk was struck when a driver looked up, realizing the traffic signal had turned green and began to accelerate. A notepad on the dash created a white reflection on the windshield, temporarily obscuring the driver’s view of the pedestrian.

A vehicle will travel 66 feet every second at a speed of 45 miles per hour. If we look at mental processing time (perception/recognition), movement time (muscle movement), mechanical device response time (brake activation) and use three seconds for the average person to react and apply the brakes, the vehicle will travel 198 feet in the span of those three seconds. This does not account for any skidding distance. Make sure to leave enough space between your vehicle and the vehicle in front of you.

Members can download the audio version of this toolbox talk here.

Driving from one location to another is a routine part of daily activities in construction. Unfortunately, it is also one of the most hazardous activities. According to the National Safety Council, traffic crashes are the leading cause of all work-related fatalities in the United States.

Despite this sobering statistic, the fact remains that many traffic-related accidents can be avoided when we make safe driving practices a part of their day-to-day routine. Understanding the importance of defensive driving and committing to it can go a long way toward preventing and reducing injury on the road.

Here are a few tips to help you drive safely and defensively:

Your life, and the lives of others, depends on your ability to drive safely and defensively.

The standard Safe Practices for Motor Vehicle Operations, ANSI/ASSE Z15.1 defines defensive driving skills as “driving to save lives, time and money, in spite of the conditions around you and the actions of others.”

Getting behind the wheel of a car or truck may seem commonplace, but it is likely the most dangerous thing you will do all day. Although you can’t control the actions of other motorists, you have great deal of control over how you operate your own vehicle. Here are a few tips to help you drive safely and defensively.

Your life, and the lives of others, depends on your ability to drive safely and defensively.

In construction, we work with, and around, rubber-wheeled equipment all the time. Properly maintained tires improve vehicle handling, fuel economy, the load-carrying capability of your vehicle or equipment and increase the life of your tires.

The most important things you can do to avoid tire failure, such as tread separation, blowouts and flat tires, is to maintain proper tire pressure, observe tire and vehicle load limits, avoid road hazards and inspect your tires.

Use the checklist below to ensure your tires provide their best ride:

Remember to do your part: be tire smart. 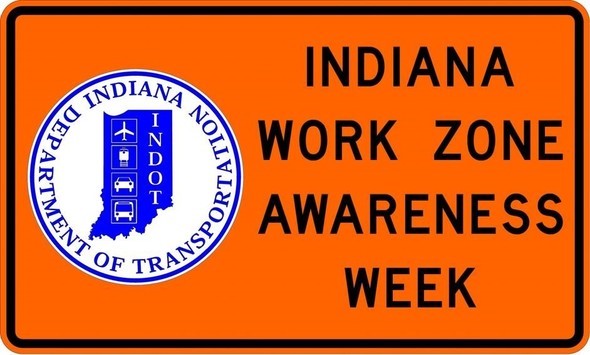 You are invited to join the Indiana Department of Transportation (INDOT) along with highway construction, utility industry and public safety partners on Tuesday, April 4 at 11 a.m. to mark the ceremonial start to highway construction season. Help us promote safe driving behaviors near work zones and raise awareness about Indiana’s Move-Over Laws as part of Work Zone Awareness Week.

WHO: INDOT and a large assembly of highway construction, utility industry and public safety partners, including:

WHY: This year’s National Work Zone Awareness Week theme is “Work Zone Safety Is In Your Hands.” We intend to raise motorists’ awareness about the personal responsibility for making safe choices and the consequences of dangerous driving behaviors near highway work zones. Our goal is to improve safety, reduce crashes and injuries, and bring the number of fatalities to zero. Safety requires participation from everyone, especially drivers, to make all highway work zones as safe as possible. We are all in this together.

For more information about Indiana’s Move-Over Laws, go to http://www.in.gov/isp/2890.htm.

Please share this invitation. Safety is the top priority of INDOT and its partners, and we need as much support as we can gather to make this construction season a success. Hardhats and safety vests or orange clothing are strongly encouraged.

Subscribe to receive text and email alerts about INDOT projects and services at http://bit.ly/INDOTsubscription.

Motorists can learn about highway work zones and other traffic alerts at indot.carsprogram.org, 1-800-261-ROAD (7623) or 511 from a mobile phone.